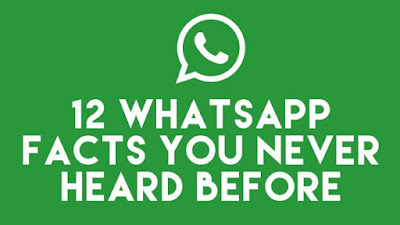 Today there will hardly be any Internet user who will not know about Whatsapp. Whatsapp is one of the most popular apps in the world, all of them know that there is nothing new in it. This is the most used app in mobile phones. Many organizations have started using it as a Business Tool. Whatsapp started by Brian Acton and Jan Koum in California in 2009. These people used to work for Yahoo first. So here we will tell you about the interesting facts about Whatsapp that you probably will not know.

1. Whatsapp co-founders were fired by Facebook for a job

Very few people will know that Whatsapp co-founders Brian Acton and Jan Koum left the job they were doing in Yahoo in 2007. Then those people applied for a job on Facebook but Facebook rejected them. And in 2009, they launched Whatsapp. And surprisingly, Facebook recovered them in 2014, bought Whatsapp for $ 19 billion (about 1,23,000 corsets).

2. The reason why the app's name is Whatsapp

Jan Koum suggested keeping this app named Whatsapp, which is derived from Whats Up, which means the beginning of the conversation. The end letter App means App |

We all know that Whatsapp is a Free App. But do you know how much does Whatsapp earn? Whatsapp has been downloaded more than 1 billion times in the Google Play Store only. Whatsapp charges $ 0.99 per year as a Subscription from its users. However, this is absolutely free in India.

4. Number of people working for Whatsapp

Whatsapp is about 8 years old company. You will be surprised to know that for more than 1 billion of Whatsapp users, only 55 employees and 50 engineers work. Even after Facebook has purchased Whatsapp, a small team is handling this Amazing App very well.

Whatsapp has more than 1 billion active users every day. More than 20 crore daily voice messages are sent on Whatsapp. One user spends the average 195 minutes on Whatsapp throughout the week.

6. The choice of many languages

Whatsapp is now available in 32 languages for Android, iPhone, Blackberry and Windows Phone. So far this is the only one messaging service that gives this facility.

7. How much photo is shared in Whatsapp

More photos are shared on Whatsapp every day than 70 crores, and more than 20 crores of photos are trashed every day.

Whatsapp started Web Client in January 2015. From this, users can also run their Whatsapp on the computer.

9. Whatsapp does not store any kind of data

Whatsapp does not store your conversations, images, audios, and videos on their server. Once the message is reached to you, they do not have any kind of data on Whatsapp's server.

10. Whatsapp Ads Does not Sell

Even though there are more than 1 billion active users every day, Whatsapp does not do advertising like Google, Facebook or Instagram. Whatsapp receives subscription fees for years from their users.

11. You can change text format

This is the most common problem that people have to face. Just like you read someone's message and you can not reply to it now. So you can hide the Blue Tick near the sender of a trick and you can reply to it when your mind. Go to  Settings> Account> Privacy> Untick Read Receipts.
friends like this post on  Top 12 Interesting facts about Whatsapp then share it with your friends too. And if you want to ask us anything about this, you can ask in the comment box below. And subscribe to our Blog's Notification so that we can get you the latest post as soon as possible.
Interesting Facts Whatsapp