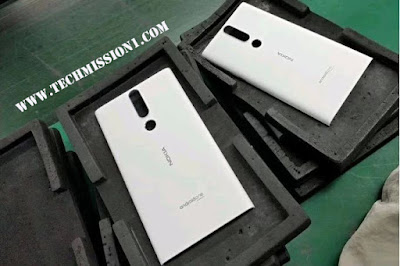 hi everyone welcomes to my blog. today I am giving you a information about new Nokia 3.1(2018) image leaked: may launch on May 29.

We have seen HMD Global launching a great smartphone this year. The company launched Nokia 1, Nokia 7 Plus, and Nokia X6, soon after that some upgraded version Nokia 6.1 and Nokia 8 Sirocco have also been launched. According to the recently received information, the company is now launching its budget smartphone Nokia 3 in Nokia 3 (2018) or the upgraded version of Nokia 3.1.
More recently, the photo of the phone's rear panel has been leaked, which is being called Nokia 3 (2018). In the leaked image, it can be clearly seen that in the device you can be presented with a variety of designs that have been modified since the last time.

According to a leaked image of Nokia 3.1, you can be given a rear side dual camera setup and fingerprint sensor right below it. There is a high likelihood that the 18: 9 full-visual display on the phone should be given but can not be said in some way.
But it is certain that we will find this device running on Nokia 3.1 Stock Android. In the image, Android One branding is given on the rear side and the forthcoming announcement made in MWC 2018 will be launching with Android-One support, both of which talk about the phone's OS.
There is not much information about the specifications of the phone. But it is certain that this coming will be better than the previous companions. Nokia 3 was launched with a 5-inch display and 1.3GHz quad-core MediaTek MT6737 chipset.
the newer version will have improved processor and cameras. The display could be the same, as this is after-all, a budget phone. We can’t speculate on anything more than that, but a recent leak did confirm that the Nokia 3.1 is coming.
Three new Nokia smartphones also received certifications in Russia very recently. The certified devices carried the model numbers TA-1075, TA-1105, and TA-1116. These could be the Nokia 5, Nokia 3, and Nokia 2018 editions as well. Still, we can’t be very sure.

HMD Global has just rolled out the Media Invite of the May 29 event to be held in Russia, where it is expected that Nokia 3 (2018) can be launched. It is also expected that in the company event, the launch of Nokia 5 and the 2018 version of Nokia 2 can also be launched. HMD Global has started sending out invitations for a new launch event on May 29th in Moscow, Russia. The invite mentions the worldwide release of new phones.
Friends if you liked this post on Nokia 3.1(2018) image leaked will launch on May 29 then share it with your friends too. And if you want to ask us anything about this, you can ask in the comment box below. And subscribe to our Blog's Notification so that we can get you the latest post as soon as possible.
nokia Smart Phone