Motorola One Power with 19:9 Notch Display and Android One Spotted 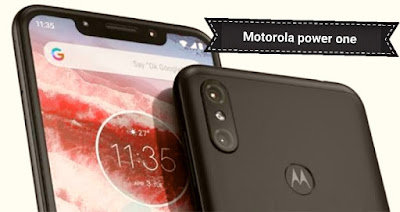 Lenovo-owned Motorola will soon launch its smartphone with its notch display. The render of this upcoming device of the company has leaked onto the Internet, which can clearly be seen as a Nine display and dual camera setup like the iPhone X. Here the name of the phone in the image is described as Android One Power, where Motorola's branding is given.

Highlights of Motorola One power :

The leaked information was first reported by Android Headlines. The image was shared on the Internet, you clearly see that the Motorola One Power 19: 9 ratio display, a little bezel with "Motorola" brand instead of Notch and Moto downwards has been given.
A rear focus here is also given vertical dual camera setup on the left side as well as to possibly work with fingerprint sensor also appears in the logo of Moto beach.
The images of Motorola One Power also confirmed that if this phone is ever launched, it will be under Android One program. This will make it the second Moto Android One phone (Moto X4 was launched in the US last year as the first moto Android One phone).

Apart from the design and software part, we don’t know much about the device as of now – not even Motorola One Power price and availability. But, we will keep you posted on the device and whatever related info surfaces.
Friends if you liked this post on Motorola One Power with 19:9 Notch Display and Android One Spotted then share it with your friends too. And if you want to ask us anything about this, you can ask in the comment box below. And subscribe to our Blog's Notification so that we can get you the latest post as soon as possible.
motorola Smart Phone