Applications that slow down your phone 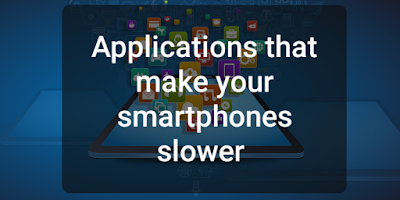 Hello friends, welcome to our blog technical hint. Today I'm going to tell you some of the apps that slow down your phone.

8 type of applications that slow down your phone

here we list out all 8 type of applications that make your smartphone slow and give you a advice about how to fix the slow performance of the smartphone.so let start...

To make the phone creative and retractable, users like to download some kind of Launcher app and Themes app. These apps consume the memory(RAM) of the phone and make it slow. Use the wallpapers and simple themes for good performance.

These apps, which claim the security of the phone but make the phone slow. Many times, we can download any antivirus app without knowing what antivirus would be right according to the configuration of our handsets. Downloading a third-party antivirus app is not good for both the phone's performance and battery.
The antivirus app is only useful when you download APK files frequently in the phone. Now companies have started delivering inbuilt software in their handsets, which not only save your phone from the virus but also keep phone data safe.

E-commerce companies offer more discount on luggage when shopping with their apps. In this way, users install multiple shopping apps on the phone. These apps consume the more ram and In this case, the phone becomes slow.

Like a RAM booster, the battery saving app is also for no use. because of these type of unnecessary apps out smartphone getting slow. So if you've downloaded and downloaded an app, then delete it

Cleaning applications claim to enhance the performance of your phone by clearing junk files and cache from the smartphone. But these applications contain too much memory. instead of this, you can do all this manually.
To clear an app downloaded catches - Settings >> Storage >> Clear Cached Data

6. Apps that claim to save RAM

Apps that claim to save RAM make the phone and processer slow. The processor of our phone is so powerful that it can easily manage our  RAM. It is better to delete these third-party apps from the phone.

Having heavy gaming apps on the phone is slowing down the phone. If you keep 2gb-3gb heavy games in the phone, uninstall them immediately(This advice only for 2 to 3 GB ram variant smartphones ).
I hope you like our article on Applications that slow down your phone. if you like this then share with your friends.and if you have any query then say us in a comment and follow us on social media platforms thank you...
Smart Phone Tips