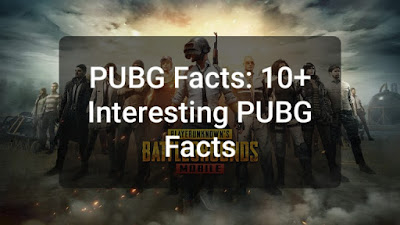 In the world of online gaming, PUBG Game has made a place in hearts of all people, if you are playing online games, you will be familiar with PUBG Game. If you play PUBG game then you must read this article carefully as in this article we will tell you about 10 + Interesting PUBG Facts related to PUBG Game.

If you are a fan of PUBG Game then you may already know about some of the PUBG facts mentioned in this article, but there are some other facts which you may not know about. Now let start.

We all know that PUBG's full name is PlayerUnknown's Battlegrounds but you know this game is Inspire from "Battle Royal" Japanese Movie. You'll find many weapons shown in the movie, you'll see in the game.

If you play pubg then you will know about Blue Zone. While playing pubg, we have to avoid and stay in Blue Zone, this Blue Zone brings pubg players closer. Initially, this Blue Zone was going to be square, but it would have been easy for the square player as well as there was a lot of trouble during its coding, so the blue line was spherical.
In the pubg game, blue zone IDEA has been taken from the Soviet Union's army. The Soviet Union's army used to disperse the intruders from the islands to spread the electricity through the land through current machines.

Tying up to the end in the game and winning the match is very exciting in itself. If you win a Pubg Game, you get to see the message " Winner Winner Chicken Dinner ". This message you will able to see in many games.
This message " Winner Winner Chicken Dinner " has been used abroad since ancient times, used to play games played with money in the old time and used to win it, then used to express their happiness using this line.

Apart from being very popular after the launch of this game, it also broke many records in the case of earnings, but many pubg players have a question in their mind about how the game earns, because this game It is available free at the Play Store and it is not available to view any kind of advertisement.
This game has to be purchased to play in the computer. This is the first things to earning., and in the game you can find many products for the player who can buy it by paying. Many pubg players buy these products, and pubg earn money,

This game has created and broke many records after the launch. Some amazing records related to this game are given below.

While playing this game, players are deployed in a GPS map, the map is designed by the game's creator Brendan Greene, and the map is derived from the name Erangel Iris, the word Eirinn, which means Ireland and Irish, as well as this The names of Brendan Greene's daughter have also been used in the name of the map.

Most of the money in the world is spent on advertising. Many online games, applications, etc. deliver their product through advertising, but you will be surprised to know that the company that created the pubg game has not spent a rupee on pubg advertising.

In the pubg game, you see a lot of things that we use for our game characters such as clothes, hats, etc. But do you know that a virtual bandana in the game is a garment that only got game pre-orderers. Many people have spent up to $ 1000 to buy that virtual bandana clothes!.
In this article, we hope that you like 10+ interesting PUBG facts, you may have liked thePUBG Facts, if you liked this article, please share the shares in social media.
games Interesting Facts