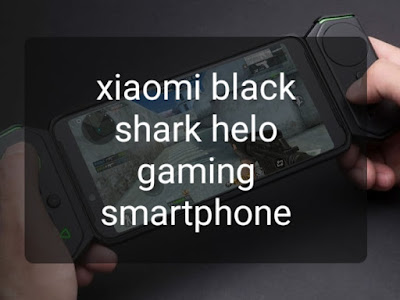 Hello everyone welcomes to technical hint. today we are talking about new launch smartphone from xiaomi sub-brand shark. the name of the new device is Xiaomi Black Shark Helo Gaming Phone.

The latest gaming smartphone from Xiaomi comes loaded with two liquid cooling pipes to cool the phone during gaming and it can reduce CPU’s core temperature up to 12-degree, which is better as compared to its predecessor. The back panel comes loaded with a glowing RGB logo and LED strips at the side. It has dedicated two-stage SHARK key that provides immersive gaming experience. The 6GB and 8GB models come with a single analog stick known as Black Shark Biplane Handle, while the top-end variant comes with two analog sticks. The phone comes loaded with X+1 antenna design for better connectivity and front stereo speakers.

The latest gaming smartphone from Xiaomi comes loaded with two liquid cooling pipes to cool the phone during gaming and it can reduce CPU’s core temperature up to 12-degree, which is better as compared to its predecessor

The Black Shark Helo Gaming Phone features a 6.01-inch Full HD+ AMOLED display with a screen resolution of 2160 x 1080 pixels. It is backed by a 4000mAh battery with Quick Charge 3.0 fast charging support.

The phone is powered by a 2.8GHz octa-core Qualcomm Snapdragon 845 processor along with Adreno 630 GPU.

I hope you like our article on Xiaomi Black Shark Helo Gaming Phone with up to 10GB of RAM announced. if you have any query about it then say us in a comment. and share with your friends. thank you...