OnePlus 3 and OnePlus 3T will soon Get Android Pie Update 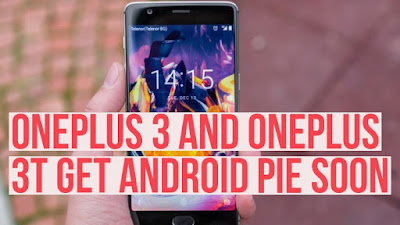 In July 2018, OnePlus had announced that it will update  Android Pie directly to its OnePlus 3 and OnePlus 3T smartphone after Android 8.1 oreo updates. At the end of 2018, OnePlus CEO Pete Lau told that releasing Android Pie update for these phones will take time, because developers need more time. Now after two months of 2019, OnePlus has confirmed that the update is going to come soon. But first security patches will be rollout.

On the Forums page many users were asked about giving OnePlus 3 and OnePlus 3T To Android Pie updates. On this, OnePlus Community Manager David Y confirmed that the company will first issue security patches then be offered to Android Pie.

Still, nothing has been said about the timeline of the Android pie rollout on Oneplus 3 And 3T. But after getting the security patches based on Android Oreo Android Pie update will come. It is also worth noting that OnePlus has never been able to answer users' queries about the delay in updates to OnePlus 3 and OnePlus 3.


Remember that OnePlus 5 and OnePlus5T users found this update in December last year. OnePlus 6 was found only in September 2018. On the other hand, OnePlus 6T out of the box came with Android Pie.