Google removed 13 applications from its Play Store. The reason behind is that the application was installing malware in the device, after which Google decided to remove them.

According to the information, most of these are gaming apps that have been downloaded to about 5,60,000 Android devices. ESET security researcher Lucas Stefano also tweeted. Stefano has also given information about these apps in his tweets. 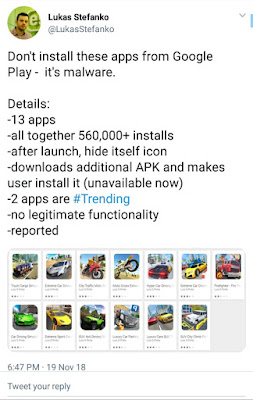 There are some applications like truck cargo simulator, extreme car driving, hypercar driving simulator, which have been accused of installing malware. Stefano said in his tweet that there are two apps in this app store that were listed in the trending section in Google Play Store. Apart from this, a remarkable thing has also been revealed that developer Luizo O Pinto has developed all these deleted apps.
When we open these apps, they force us to install APK game centres. According to media reports, after installing the APK, this app display ad when the device was unlocked.

When the users try to open these apps, These apps was crashed, but it still installs malware in the phone.