Chinese smartphone and smart TV maker Xiaomi launched its Mi TV Series’s next  Mi TV 4S. This smart TV has a 75-inch 4K display. This TV is currently launched in China. This smart TV will be competing with South Korean companies LG and Samsung’s 4K smart TVs.  premium materials aluminum used in this TV. Come on,Lets tell you about the features and price of this smart TV 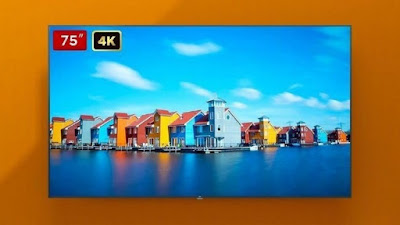 First thing to say is that the TV’s height is 1026 millimeters, and its weight is 23.5 kilograms (without a base stand). Talk about its screen, it’s 75 inches, which has a resolution of 3840 x 2160. Smart TV has very thin bezel from the all four sides. Also in TV you can enjoy 4K quality video.

Smart TV has 2GB of RAM and 8GB inbuilt storage. Talking about the processor, the Mali 450 GPU is also included with the QuadCore Cortex A53 CPU. TV supports Android operating system.

TV has bluetooth, infrared and dual band are equipped with Wi-Fi features. The TV has 3 HDMI ports, an AV (audio-visual) port, two USB ports, and an Internet Ethernet port. Talking about the TV’s speakers, it has  Dolby Sound system of both sides 8W.

There is no information about the globle launch. But sortly xiaomi introduce it in globle market.
Thompson UHD 4K Smart TV
Thompson has recently stepped into the Indian market. Thompson launches UHD 4K Smart TV under the UD9 range. It also comes in cost effective and gives users the experience of smart TVs like LG, Sony or Samsung.

Nokia partners with Google to build a cloud-based 5G network